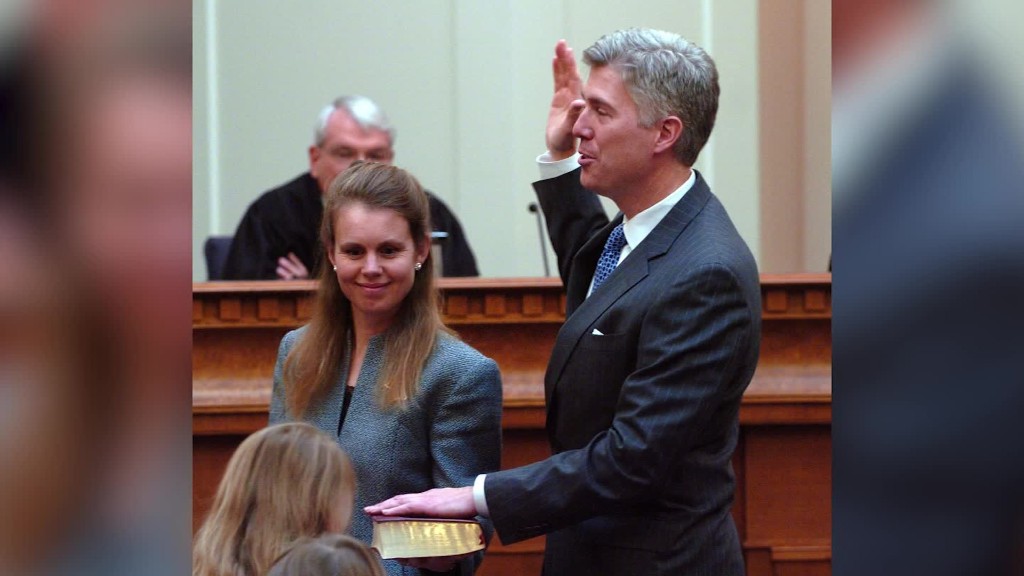 Who is Judge Neil Gorsuch?

One legal decision holds the key to why business is excited about Neil Gorsuch, President Trump’s nominee for the Supreme Court.

And it’s not Hobby Lobby, which touched on Obamacare, birth control, religion and corporations — though Gorsuch joined an influential opinion in that case.

It’s a much lower-profile decision about whether federal regulators get to call the shots in interpreting the law. And it may help explain why Gorsuch appealed to Trump, who has made rolling back regulation a focus of his young administration.

Under a decades-old legal precedent, courts have granted federal government agencies broad powers to interpret laws and rules. The precedent is called the Chevron doctrine, or Chevron deference, and it comes from a Supreme Court decision in 1984, when Gorsuch was in high school.

Essentially, it holds that when the intent of a law is not clear, courts should defer to regulators to decide how rules should be applied.

Gorsuch sits on the federal appeals court in Denver. In a concurring opinion last August in a case before that court, Gorsuch did not throw out the Chevron doctrine, but he made clear that he questions its validity.

Chevron, he wrote, allows bureaucracies in the executive branch to “swallow huge amounts” of power from the judicial and legislative branches, and concentrates federal power “in a way that seems more than a little difficult to square with the Constitution of the framers’ design.”

“Maybe the time has come to face the behemoth,” he wrote.

The decision also demonstrated Gorsuch’s widely acknowledged flair for writing. He wrote that allowing regulators the power to interpret laws gives them license to pre-empt the courts — and essentially write laws without the inconvenience of the legislative process.

“A form of Lawmaking Made Easy,” he concluded, “one that permits all too easy intrusions on the liberty of the people.”

When the Environmental Protection Agency loosened air pollution rules during the Reagan administration, environmentalists mounted a challenge. The Chevron case affirmed the EPA’s authority to adjust those rules.

Since that 1984 decision, the legal theory has frequently been used to allow greater regulation of businesses. For example, in 2015, the Obama administration used Chevron to give the EPA greater authority over relatively small bodies of water.

So regulatory power remains a major issue for business, and business groups were quick to hail Gorsuch’s nomination on Tuesday night.

His willingness to challenge the Chevron doctrine “is a very positive signal to small businesses,” said Juanita Duggan, CEO of the National Federation of Independent Businesses, a small business trade group. “Regulatory overreach is a serious threat and the basis on which NFIB is actively fighting multiple agencies in federal court.”

Related: Cutting regulations is not so easy

Regulatory power is also probably what several Democratic senators were thinking about as they unleashed attacks on Trump’s pick.

Senator Charles Schumer, the Democratic leader in the Senate, said that Gorsuch “repeatedly sided with corporations over working people,” and, “most troubling, hewed to an ideological approach to jurisprudence that makes me skeptical that he can be a strong, independent justice on the court.”

Chevron is such established legal theory that it was endorsed by Justice Antonin Scalia, the late conservative justice whose seat Gorsuch would fill. But it is not absolute. It has already been scaled back in recent decisions, including one by Scalia that limited other EPA rules.

And if Gorsuch is confirmed, it will not necessarily mean an end to the precedent, said Jonathan Adler, who teaches constitutional, administrative, and environmental law at Case Western University’s law school.

“His confirmation does not mean a wholesale revolution in administrative law,” he said. “It means we have another justice who has questions how to apply regulations,” he said.